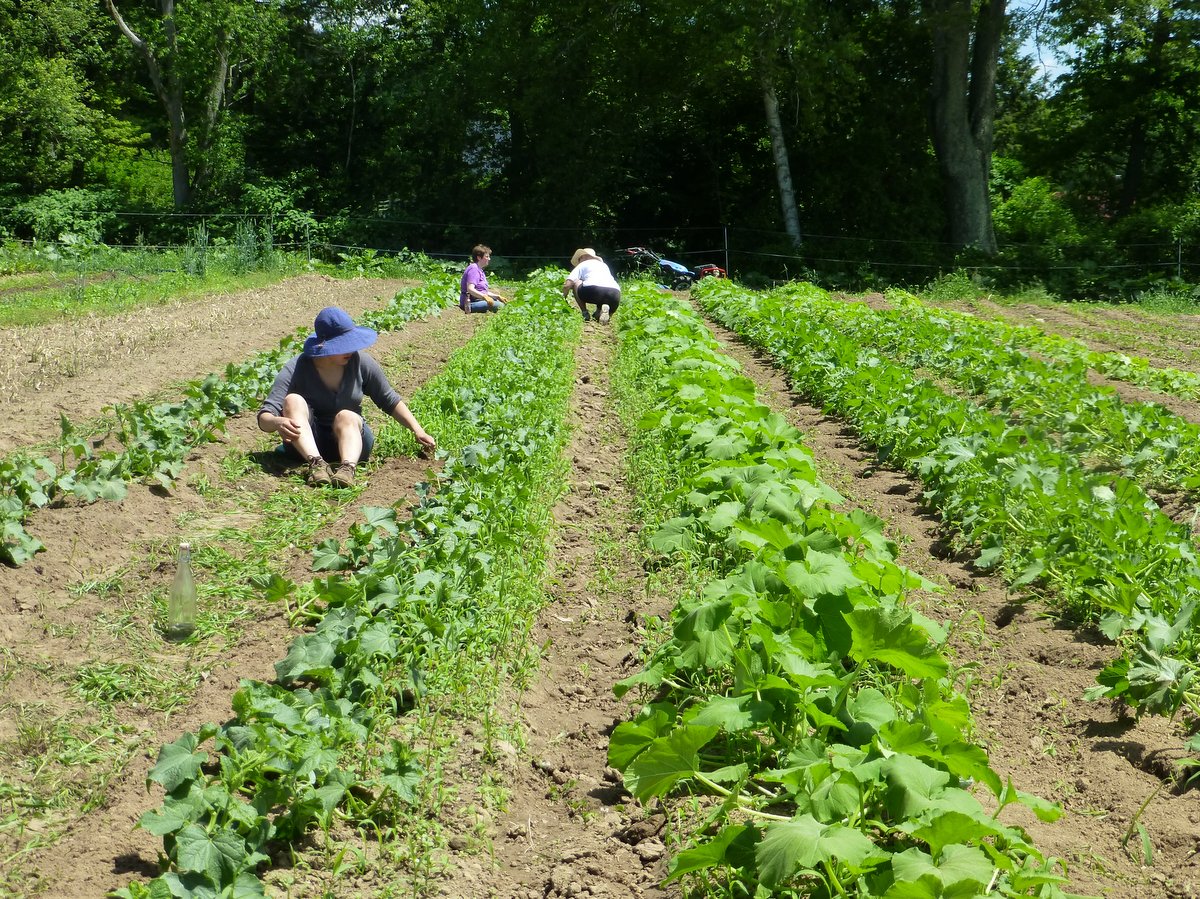 The eighty-plus degree days are upon us as we head toward the solstice’s long sun. We’ve seen plenty of showers, but the blazing sun has dried the soil quickly and allowed the plants to photosynthesize with gusto—crops and weeds alike!In the place where the cathedral greenhouse used to be, the carrots and beets are fighting for their nutrients. The farmers and sharers have been helping them and other plants by pulling, raking, and hoeing weeds whenever we’re not planting. Neat and orderly rows reveal themselves after deft hands clear the unwanteds, provoking the cycle to begin again.

Planting has been in full swing as well. Smaller crops such as fennel, parsley, celery, and celeriac have been dug in, with larger plantings taking more time to find their places. The tomatoes, peppers, and eggplants were planted into bio-plastic (like the alliums) and their aisles mulched with leaves. Volunteers have been pounding stakes whenever they can because those nightshades are growing fast! The greenhouse tomatoes have started flowering and we can’t wait to see the first fruit forming. The cucurbits have also found their places for the season’s drama to play out. Both the cucumbers with their touch-sensitive roots and the summer and winter squashes were planted in single file rows. The ones under the white row covers exploded with growth that nearly blankets the beds completely. Sixth, seventh, and eighth successions of lettuces have also gone in, creating a mosaic of greens, reds, and rusts, forming a makeshift flag as seen from above.

Along with weed pressure, we’re also seeing a bit of pest pressure. If you’ve had lunch with us recently, you know that the green caterpillars and inchworms will find you wherever you sit. And, we’ve taken steps to combat cabbage maggot, which is the grub of a fly that eats roots and subsequently kills the plants. Amazingly, we’ve used other, microscopic worms called nematodes to counter the grubs. Nematodes are sprayed on using water and eat the eggs and grubs. Each cycle of nematodes lasts about two weeks. We’ve lost a bit of crop but we’ve seen a lot of plants come back from an assumed death. Go nematodes!

All in all, the season is playing out with the normal ups and downs—with the ups certainly coming out on top. The strawberries are blooming and ripe red fruit dot the beds, causing a test of will powers not to gobble them all. The spinach is gigantic and the Swiss chard create a rainbow haze in their beds. Pickups are starting this week and Susan, Kenneth, and I are looking forward to munching on greens with you and seeing all your smiling faces!