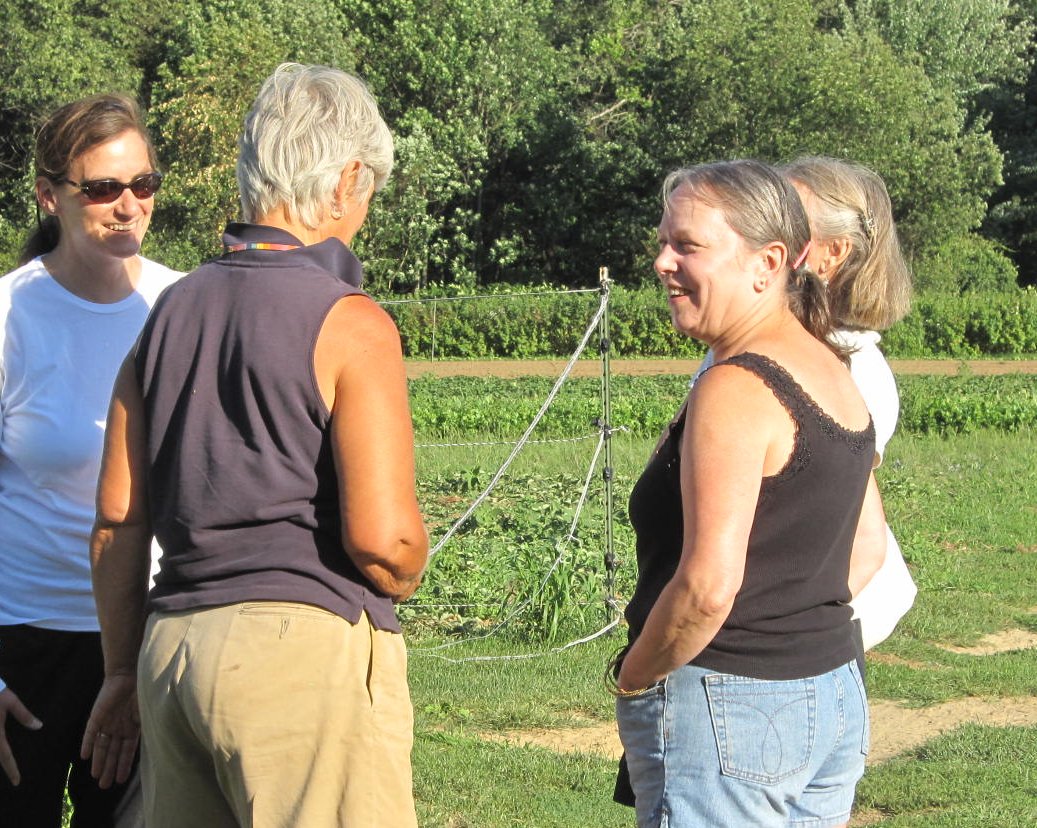 Stearns Farm was founded by Penelope Turton in the early 1950s, and she farmed this land for almost 40 years. Penelope was an English friend of the Welch family who moved to Framingham after WWII. She sold her organic produce at a farm stand and hired local people as farm hands. As Penelope got older she sought a way to preserve Stearns Farm as a working organic farm and was attracted by the then-novel idea of Community Supported Agriculture (CSA). Current Stearns Farm sharers Nina Kornstein, Tom Yelton, and John Blanchard were part of the group that worked with Penelope to create Stearns Farm CSA. In this interview Nina Kornstein (in black shirt) shares some of her memories of working with Penelope during those early years.

A:                   I found Stearns in the Yellow Pages and came to pick and buy organic raspberries and blackberries in June of 1983. Penelope needed help and hired me at minimum wage to work as a field hand for the summer and fall of 1983. I was 29 yrs old and taking some time off from graduate school. My husband and I had just bought a house in Framingham and I wanted to learn how to grow my own organic garden. Penelope taught me a lot and I supplied my neighborhood with vegetables from my abundant garden for many years.

A:             A number of Penelope’s customers began meeting as a group to create the CSA in the late 1980’s, and by 1990 we had become a Board of Directors, which was necessary in order for the Farm to get its non-profit status. Laurie Daly was president and Dick Daly was treasurer, I was vice-president, Cindy Stucchi shared the job of secretary with Cecelia Parks. Tom Yelton was also a member of the Board.

A:               Finding and retaining a good farmer! Penelope had a very strong personality and had been running the farm on her own for decades, so it was hard for her to hand over the reins to someone else. Also we couldn’t afford to pay a farmer very much, certainly not a living wage. We had a lot of farmer turnover in those early years: the first CSA year we hired farmer Amy Wales (1990), and after she didn’t get along with Penelope (they weren’t on speaking terms at the end of the season!) we hired farmer Tim Cooke (1991, 1992). In the second year of our contract with Tim he had us write into the contract that Penelope or the Board would not interfere with him during the farm season because Penelope was so overbearing! We were so desperate for a farmer we agreed.

After that we had a series of different farmers—none lasted for more than a year or two. Some of the farmers we interviewed didn’t want the job because we didn’t have a tractor, a greenhouse, or other infrastructure, and we couldn’t pay a living wage. That changed when I serendipitously found Kathy Huckins in 1998 (pictured above, in blue shirt). I was sitting next to Laurie Lee (current Framingham Selectman) at my neighborhood pool and tennis cooperative and mentioned we were looking for a farmer. She knew Kathy from her homeschooling community and suggested I give her a call. The rest is history. With Kathy’s guidance, extremely hard work, and competence, our farm finally began to thrive and grow.

A:                  The farm has grown and expanded. During Kathy’s twelve-year tenure we bought tractors and other equipment, built a greenhouse, installed irrigation systems, initiated stone soup for community lunch, and created an expanding CSA that enabled us to begin to pay our farmer more and give her benefits. Kathy also negotiated more land with other farmers in our community, which enable us to use the parkland to grow more food. Until Kathy farmed Stearns, the other local farmers saw us as a garden club. She was able to connect with Hanson’s Farm, Doug Stephan at Eastleigh and the Harringtons next door to create relationships that really helped Stearns Farm.

Under Kathy’s tenure we became a much larger community (our first CSA had 10 sharers and now we have 160); we also began to invite community members to the farm as volunteers, to have the opportunity to learn about farming. As we have expanded our membership we have been able to increase the farmer’s salary and provide a living wage. Kathy pioneered the winter share which is wonderful. It is amazing to get local produce in November and December. What has stayed the same is the beauty of this place, the fact that it is an organic farm, and the wonderful local vegetables and fruits that the farm provides us.

Susan Peters worked on our farm when Kathy was the farmer. Now as our farmer she is doing an incredible job moving the farm into the future and maintaining the systems and practices that Kathy created while adding her own management style. We are very fortunate to have Susan, and I am optimistic that our farm will continue to thrive.