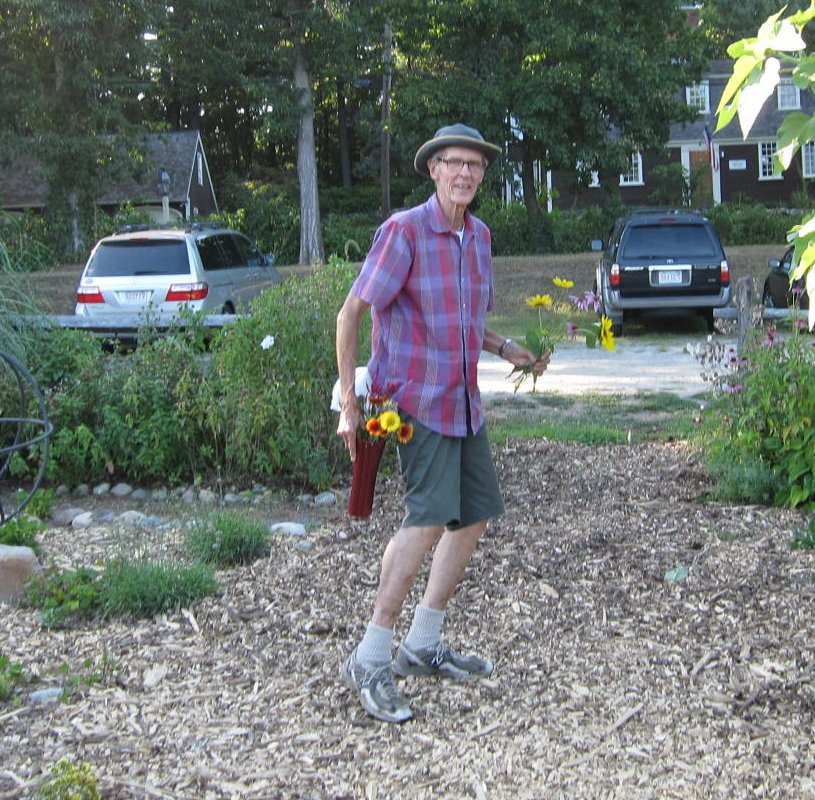 As part of our focus on Stearns Farm history, we are re-publishing a profile of long-time sharer John Blanchard from the June 23, 2008 issue of Stone Soup, The Stearns Farm Newsletter. That year John donated the high-tunnel greenhouse that allowed us to extend the growing season and offer a robust winter share. John’s generous donation is one of many that the farm has received from him and other sharers over the years. To read the profile in the original context click here.

Why does John Blanchard want to give Stearns Farm a movable greenhouse?  A former missionary, truck driver, and Laundromat owner, John has a farmer’s soul and an activist’s dedication to education. Adding a greenhouse will allow Stearns to extend its growing season and expand its mission of creating a model for sustainable local agriculture. And that’s important to John Blanchard.

Now 77, John has been gardening since he was in first grade, when his dad put him to work in the family’s garden in Pennsylvania. After earning a degree in Pomology (the study of apple and pear trees) from Pennsylvania State University, John joined a Methodist church mission to Sawarak—then a part of Borneo, and now a part of Eastern Malaysia. Living among the Iban people from 1959-1963 was, John says, “a marvelous education for changing one’s outlook on life.”  But perhaps more influential than the agricultural work he had come to do in Sawark was John’s growing understanding of the importance of sustainable development. Once he arrived in Sawark John found himself increasingly interested in helping the Iban transition to a money economy and become independent of the local Chinese commercial elite.

After returning to the U.S. John and his wife settled in Maine, where he had accepted a position as a pastor of two rural churches.  His stint as pastor lasted one month. Casting around for work, John bought a Laundromat and discovered that it provided a way to engage in the kind of community organizing and education work he had found so compelling in Sarawk.

Although the informal community work he did in Maine was satisfying and the Laundromat was thriving, John wanted to put service back at the center of his life.  In 1969 he and his family moved to Framingham to participate in year-long internship sponsored by a non-denominational Christian education program.  The program wasn’t a good fit, and John soon found himself working in the grocery department at the Big D supermarket in Nobscot.  John began attending the Friends Meeting on Edmands Road where he learned about a non-profit organization that focused on creating employee-owned businesses. Before long he had joined the organization as coordinator of land trust services. John had finally found a job that combined his dedication to service with his commitment to local agriculture and economic development.

At the Friends Meeting John also met Penelope Turton and began his decades-long relationship with Stearns Farm.  During one of the first years that Stearns was a CSA, the Farmer quit suddenly and John volunteered to run the farm for the rest of the season despite the fact that he already had a full time job driving a delivery truck. In the years since, John has been a sharer at Stearns and has farmed on various pieces of land in the area, selling his organic produce at farm stands and to area restaurants.  But much as he loves farming his own patch, John always returns to community farming. When he learned about movable greenhouses at a Northeast Organic Farming Association (NOFA) workshop a few years ago, he found a new mission. He discussed the possibility of installing a greenhouse with a number of local farmers, but only at Stearns did he find the right combination of land and people power necessary to construct, use, and eventually, move, such a greenhouse. 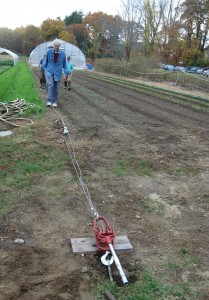 The greenhouse, which is scheduled to arrive during the current growing season, will be a “high tunnel” style.  The tunnel is covered with heavy-duty clear plastic and has adjustable ventilation to control the temperature.  It will keep both the air and the soil on which it sits warm. The tunnel will be located in the field below the flower garden, where the necessary slope can easily be achieved, and where there is space to move it (for crop rotation).  Kathy will use the greenhouse to extend the growing season of both warm season crops, like tomatoes and melons, and for cool season crops like lettuce. In conjunction with our soon-to-be completed root cellar, the greenhouse will significantly increase Stearns’ ability to provide fresh produce in the fall and winter months.

Although he left church work a long time ago, John has remained a missionary. His lifelong dedication to sustainable agriculture, economic development, and education have taken him around the world.  And now all Stearns sharers will benefit from John’s dedication to bringing a greenhouse to our beautiful and productive farm.