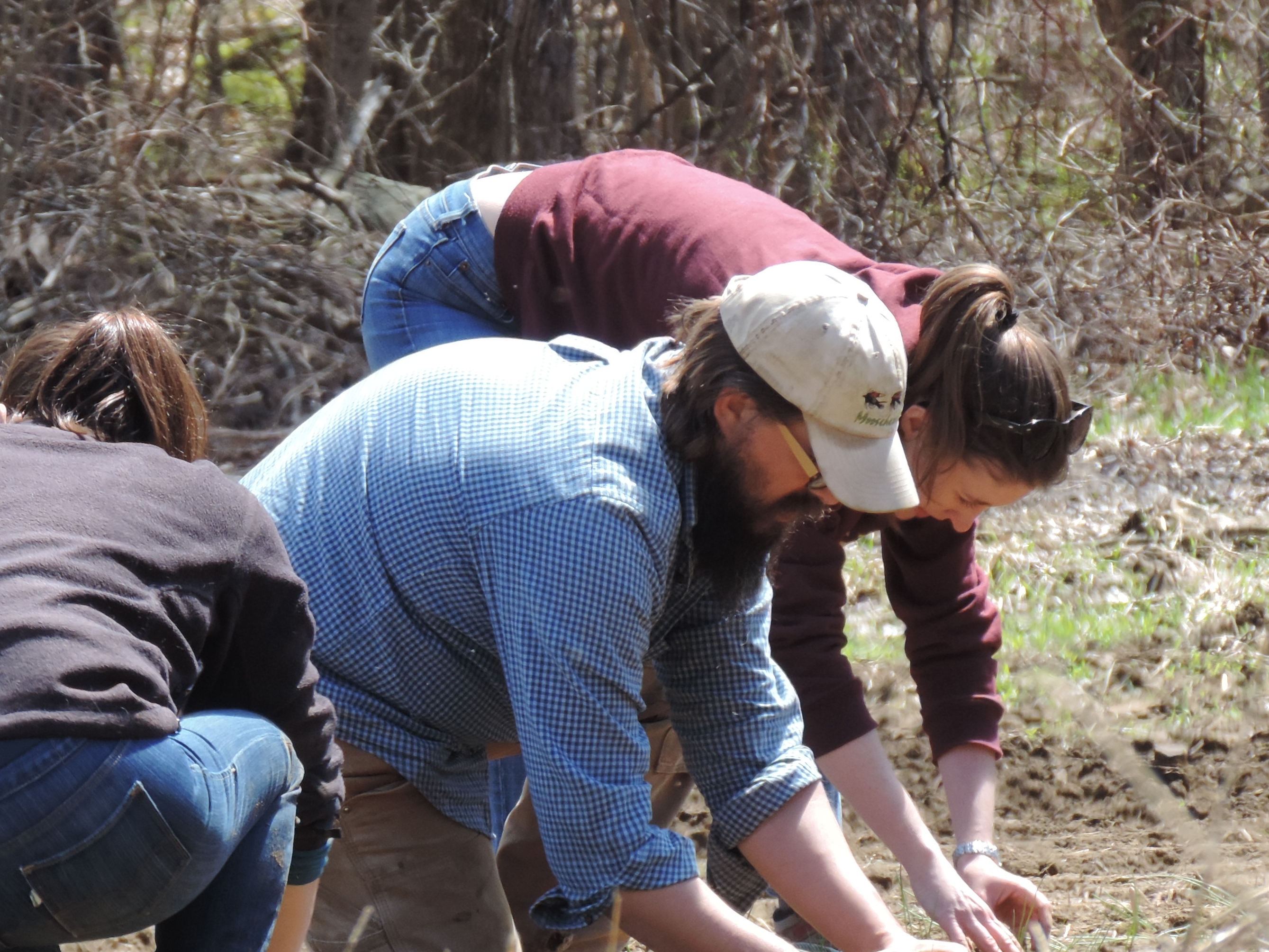 There comes a point in a season on a farm that feels like you’re at the top of a roller coaster. The cars are at the apex of the first hill, the track is only partially laid out before you, there’ll be twists and loops you know, but from this vantage point, you can’t know where they are yet. All the excitement is stored, like potential energy, waiting to release and drop us into the season. We’re just getting to that point now. Such a lot to tell you!

April has been a month of anticipation, like the roller coaster cars clunking to that first hill. We’ve managed to accomplish a bunch thus far. As Susan has mentioned, we had spring clean up day on April 25 (thanks to all those who lent a hand!), and we’ve been steadily organizing and preparing the farm for the last few weeks.

Infrastructure-wise, you’ll notice we’re starting to tidy up as well. We hadn’t planned to replace the big green cover-it near the outhouse but it collapsed over the winter. The snow bent the curved structural piping right to the ground. Thanks to long-time volunteer Rick for dismantling it, repurposing what could be reused, and disposing of the rest! This project forced us to organize quite a bit, and now we have a nice big open space waiting for a purpose.

Kenneth, too, had some dismantling to do. With the tractor, he knocked down our crumbling amendments shed (all the while with a look of utter joy on his face). In the space where the shed was, Rick temporarily assembled a smaller cover-it that he found in the collapsed one. Ultimately, as the season progresses, you’ll see crumbling sheds coming down, and new sheds going up. We’re very excited to become more efficient in space, and in so doing, in time as well.

Most importantly, though, we have been planting, planting, planting. Kenneth and I have been preparing beds as soon as the seedlings tell us they’re ready to go in. For leafy goodness, we’ve planted kale, escarole, Swiss chard, and bokchoi. A couple of the “double crops,” beets and kholrabi, have found homes as well. You may remember from last season, that these are crops that have two edible parts, like leaf and root. We’ve also direct seeded more beets, as well as carrots and peas.

Our newest beds of strawberries have also found their spots. The strawberries are on a three-year cycle. In the first year, we remove the flower buds and allow the plants to put all their energy into growing and producing strong runners. In the second and third years, we harvest those beautiful, heart-shaped jewels of sweetness! We always have three patches of strawberries, with the newest patch replacing the third-year patch every season.

We’re also happy to report that all of our alliums are in. In an intensive few days of planting, and with loads of help, close to 10,000 onions plugs went into the ground (oh, my aching back!). A great big thank to the sharers who put in work hours and the volunteers from Boston Cares for making sure our onion planting was a smooth one.

It is absolutely wonderful to see smiling familiar faces and excited new faces as the season begins. See you in the fields!