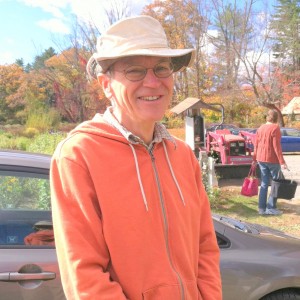 After 16 years as Stearns Farm volunteer webmaster and IT manager, Tom Yelton has retired.

Tom joined Stearns Farm when it became a CSA in 1990, before the internet era. He built the Stearns Farm website in 2002, when few CSA farms had one. A few years later, he created the work hours signup system, as well as the enrollment and member information database systems, integrating the latter with the farm’s accounting system.

“Tom has worked tirelessly behind the scenes for decades to help keep the farm’s essential operations working smoothly,” says Nomi Sofer, president of the Stearns Farm board of directors.

He devoted numerous hours annually to maintaining, upgrading and troubleshooting all the farm’s technology, culminating with last season’s deployment of the online store and our recent website redesign. In addition, until last year, Tom covered the fees to the company that hosted the farm’s web server. “Our ecologically- and health-conscious community, and the feeling of doing some good for the world kept me going,” Tom says.

Tom’s commitment to the farm extended beyond the keyboard. He was a part of the original standing committee that Penelope Turton asked to help form the CSA. He then volunteered as a member of the Stearns Farm board of directors for 25 years, stepping down in 2014. In the early 00’s, he purchased the farm’s composting toilet on eBay, and with fellow board member Malcolm MacNeill built the shed for it.  He also took primary responsibility for maintaining the facility in subsequent years. However, he recalls, “the most rewarding project, was the original greenhouse that Dick Daly and I constructed many, many years ago—the one that caved in in the big snowstorm and was replaced by the current one.”