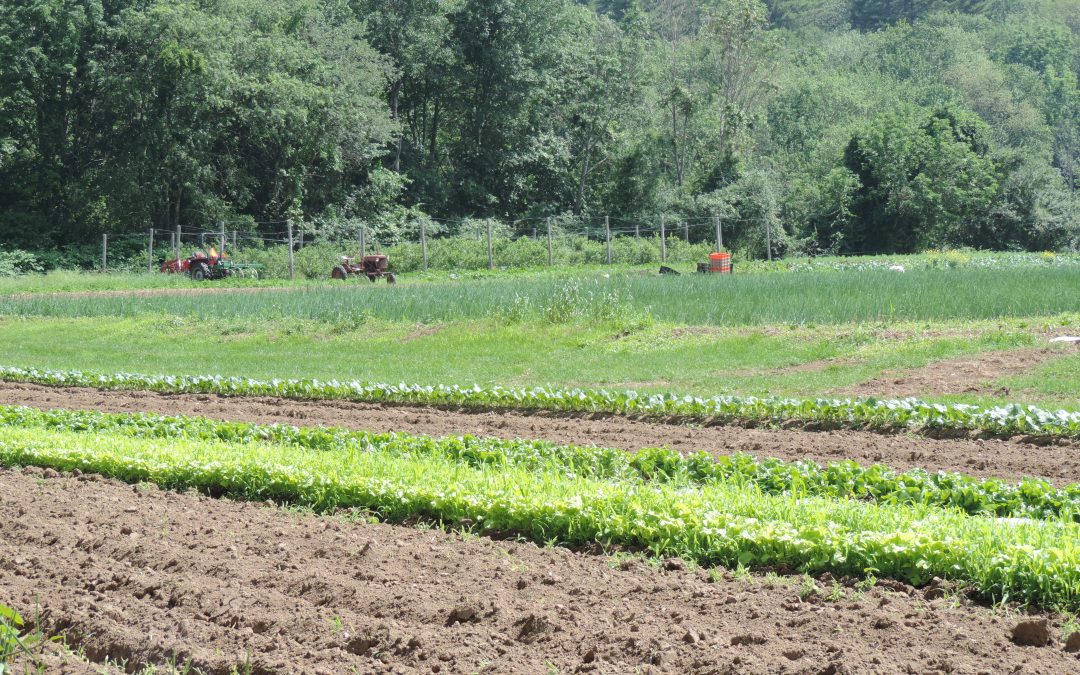 Hello sharers! This week, I’m giving you all a good, old-fashioned crops and field report.

Every growing season is different, and so far this season is very different from dry, hot 2016. Last year was what I’ll call a “just add water” year—it was like growing in southern California, where much of the nation’s veggies are produced. We had tons of heat and sunshine, and when you added water, the crops grew very quickly! There was very little plant disease as a result of the dry weather. We may have ended up with a humongous water bill, but the growing conditions were ideal for many crops.

With a couple of exceptions (in the form of two mini-heatwaves), this year has been much more cloudy, wet, and cool. While you can add water in a drought year, you cannot add sunshine and warmth to a cool year. Two weeks ago, the weekly UMass Extension vegetable production report stated that soil temperatures around the state were an average of 4 degrees below what is normal for early to mid-June. When I spoke to a long-time farmer friend yesterday, he told me that soil temps were still below normal. Without sunshine and heat, plant growth just isn’t as robust: our field tomatoes sat in the field for nearly three weeks turning purple (a sign of stress) and are just starting to turn the lush dark green we all associate with happy and healthy tomato plants. Other crops are looking healthy, but are just taking their sweet time growing.

Our greens, as you know, have been doing well. In addition, our onion and shallot crop are looking fantastic. Onions and shallots start to bulb up after the solstice, when shorter day length triggers bulb formation. If the tops of our plants are any indication, it’s going to be a great allium year.

The long-term effects of last year’s drought are still with us, however—most visibly in our blueberry and strawberry crops. We were so busy keeping our veggies alive that we didn’t have the time or money to irrigate these perennial crops in a meaningful way. The blueberry bushes on the down-slope of the planting–which is wetter—are thriving and covered in berries, but the bushes on high, dry ground lost all of their fruiting branches in the drought last year. The good news is that we’ve pruned them well, and there is lots of new growth that will produce fruit next year. As for the strawberries, they didn’t get enough irrigation last year to get as established as they could have. Secondary effects of the drought then impacted the plants even more. In November, hungry deer got in and chowed down on the two things that were available to them in the fields: two beautiful beds of carrots and our strawberry planting.

Woodchucks and rabbits seem to be abundant this season. There is at least one giant woodchuck that hangs out in the raspberries, another woodchuck over by the SVT trail, and several rabbits along our field edges, and hiding under sheds. We had a lush crop of lettuce that was growing under cover for 3-4 weeks. I uncovered it so that we could weed it and also so that it didn’t get to hot and go to seed. I weeded it one Saturday with some volunteers and returned two days later to find it 75% chomped-on. The scale of damage tells me that it was either a woodchuck or a small team of rabbits, both of which are nearly impossible to control in any way. This week and next, lettuce availability will be tight as a result of what I am calling the Great Salad Massacre of 2017.

Thanks for reading and please feel free to contact me with ay questions you might have about the farm or our growing methods.