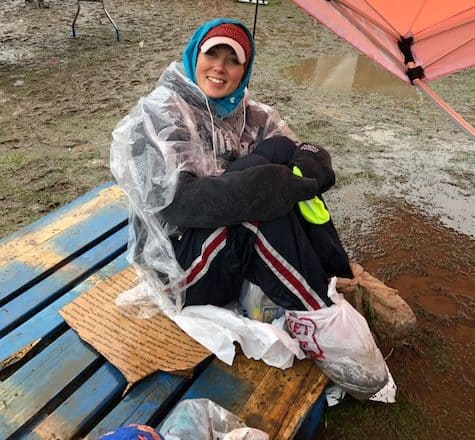 Stearns Farm sponsored Diana, contributing $250 and helping her collect more than $1,000 above what she raised for her run last year.

“The marathon itself was an adventure,” Diana wrote in an update to supporters after the unusually cold, windy, wet race. “I adjusted my expectations. I decided my time was not important. The only thing that mattered was stepping across that finish line safely–injury free, with no hypothermia and no visits to the med tent. Because of that decision, I was free to enjoy the day.”

Diana reported her time as 20 minutes longer than last year, which, she wrote, inspires her to try again.

Running in a downpour meant Diana had to stop and retie her shoes four times, because the rain loosened the laces. And she changed her socks twice. She had brought an extra pair with her, which she put on at mile 15. “They were only dry for the next mile and a half, but that didn’t matter.”

At the top of Heartbreak Hill, Diana spotted a spectator with a sign touting dry socks. “I asked him, Seriously?” she wrote. “He said Yes, seriously and pulled out a plastic bin full of socks. I broke down in tears at this act of kindness as he sat me down in a chair, and helped me untie my laces and change my socks.”