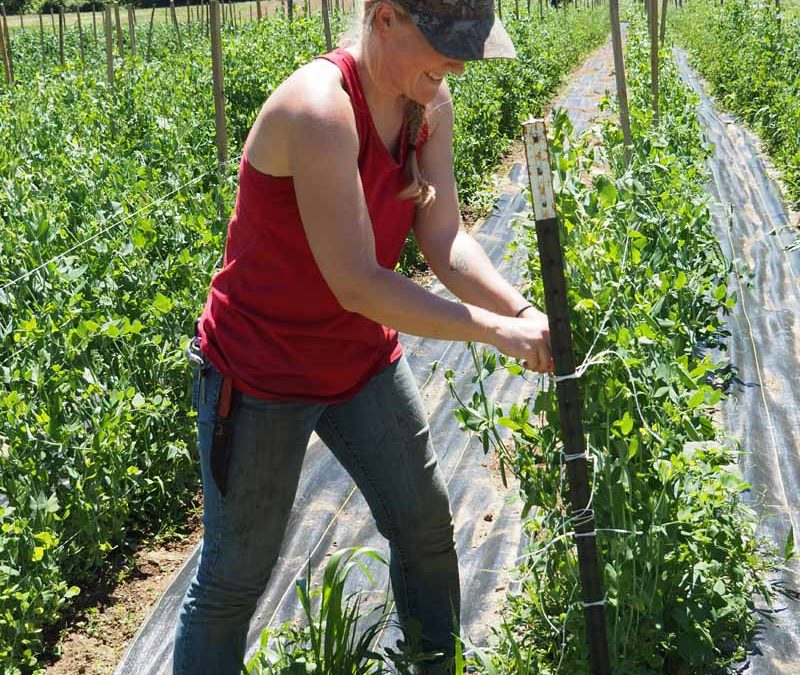 This spring, some of our favorite animals and plants have come back to the farm, including  catbirds, goldfinches, orioles, monarch butterflies, ferns, nettles, and perennial herbs. We have also begun to see common pests that target our crops. These pests are regular visitors to many farms in the area. Here’s how we keep them from doing too much damage.

Wireworms hatch and begin feeding on roots when the soil temperature warms up. They typically target root vegetables such as carrots, potatoes, radishes and turnips. They can also be found in corn seedlings, strawberries, and the stems of tomato transplants. We often find wireworm damage on our carrots, radishes, and turnips. The vegetables are fine to eat, but they ruin the aesthetic of the root crop.

This year we have discovered wireworms in the tomato seedlings that we transplanted in our greenhouse. Unfortunately, they kill the plants that they infest. At our scale, there isn’t much we can do other than replace the dead plants. Meanwhile, once the transplants are big and strong enough, the wireworms may choose to find another food source and leave the tomatoes alone.

Most cutworms will overwinter in soil or under plant debris and begin feeding in early spring. They eventually become moths that feed on nectar, but as worms they can do a ton of damage. Surface cutworms, which we see on our farm, will chew a plant just above or below soil level, causing the plant to topple over. Some cutworms move on after that, but they are also known to drag the rest of the plant down into the ground. We initially saw a few tomato plants dying from cutworm. The worms made a distinct and precise cut just at soil level, making it seem like the tomato had snapped in half in the wind. Thankfully we only lost a few plants because of cutworm and were able to replace them.

Flea beetles are black, tiny beetles that jump. They are so small and fast that they are sometimes hard to see. Flea beetles feed on foliage, making small holes in the leafy greens. They can cause significant damage when the plants are young, but only minor injury to well established plants. We find that flea beetles are most attracted to bok choy, radish greens and arugula. When the plants are young, we make sure to cover our crops with row covers to prevent the beatles from jumping over and discovering a plant they like to eat.

Groundhogs are rodents in the squirrel family that hibernate from late fall to early spring. They are most active and searching for food during the late morning and late afternoon. Depending on food availability, their home territory may range between .75 – 2.25 acres. We have discovered at least four main groundhog holes on the perimeter of the farm, and the creatures have nibbled on many of our delicious vegetables already. (Who knew they liked fennel?!)

Since it is illegal to trap and move groundhogs off the property–and nearly impossible to search for and cover all their holes–we plant their favorite foods as far from the holes as possible. Even then, it’s only a matter of time before they make holes in our fields. Last year, even after picking, there were three groundhog holes in our peas!

There are many other ways to combat these pests, and we are constantly learning and trying new things that may help. If you have concerns about pests in your own gardens, Mother Earth Living and Old Farmer’s Almanac are among many websites that provide helpful information. University-based agricultural extension programs, such as at UMass and Cornell, that have solutions for farms may also have ideas for home gardens.