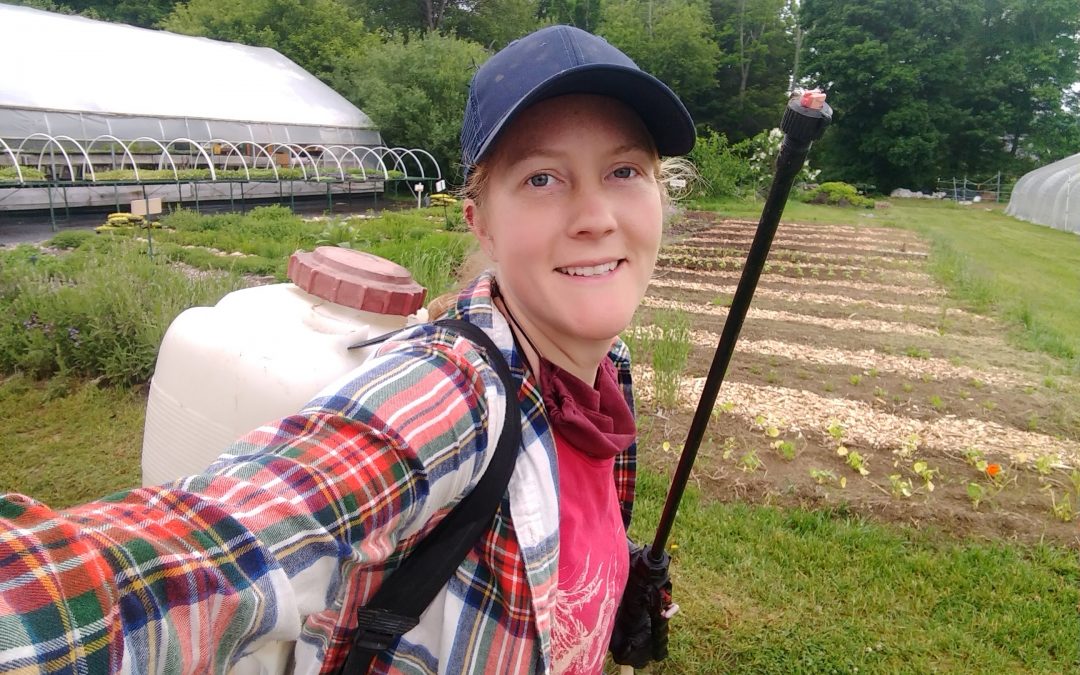 Pests are one of the most important issues organic farmers deal with on a daily basis. In order to keep from using chemicals, it is important to always be one step ahead of the animals and bugs that target certain crops. Each season brings on new challenges, but there are many organic methods that can help in almost any situation. I am going to highlight a few pests that are making an appearance on the farm this year and what our strategies are in dealing with them.

Flea Beetle:
You may have noticed that the arugula in your share recently had many tiny holes in the leaves. This is the result of a pest called the flea beetle. They are tiny black beetles that eat irregular holes in the leaves of things such as radish greens, turnip greens, arugula, eggplant, tomatoes, spinach and broccoli. One distinct characteristic of flea beetles is that they jump off the plant in a kind of “popcorn popping” fashion when you run your hand over the leaves. Our main way of dealing with flea beetles is to shield these crops with row cover for the first few weeks of their life to prevent the insects from finding and landing on the plants. After a certain point, the plants are strong enough to keep growing even if the flea beetles discover them.

Root Maggot:
Earlier this spring, we discovered that some of our onion, cabbage, bok choy and kale plants were dying. After some close observation of the plants and its’ roots, it became clear that we had a root maggot problem. The onions looked yellow and stunted and when we dug them up, the tiny bulb was mush. Some of the cabbage, bok choy and kale had dozens of maggots actually hanging out in the roots of the plant. I went through and pulled out the dead and stunted plants and as many of the grubs as I could and threw them away. We then purchased beneficial nematodes from Arbico Organics that specifically target root maggots. They came in a powder which I added water to and then used our backpack sprayer to apply the nematodes to the soil. We saw results almost immediately and were able to successfully stop the spread of the root maggots.

Three-lined potato beetle:
This beetle is similar in appearance to the cucumber beetle, but has slightly different coloring. It targets our tomatillos every year, so this year, we scouted for them and were ready before the invasion too out of control. The adults will lay their eggs on the underside of the leaves and when the eggs hatch, they devour the leaves of the tomatillo plant. In order to keep this from happening, we went through the planting twice to remove the adult beetles and check the underside of each leaf to remove any eggs we found. This has helped tremendously and the plants look great!