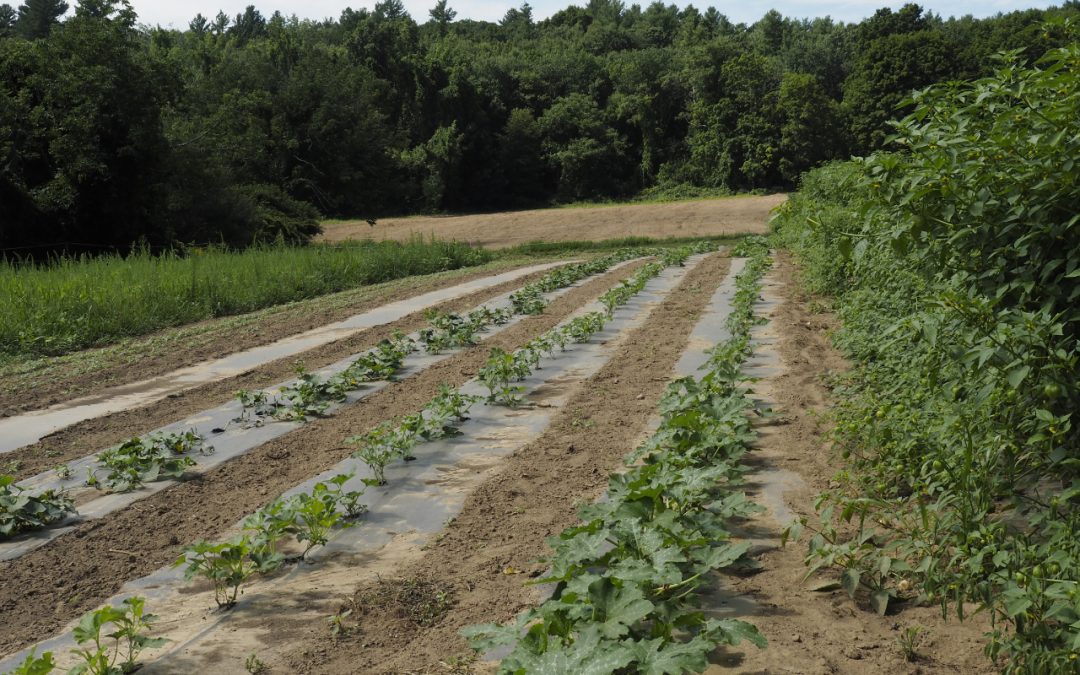 The heat this summer has felt excessive and extreme. We usually see a heat wave or two, but a daily high of 90℉ seems to be the new norm! The increase in temperature combined with the lack of rain can cause a few problems for our vegetable friends here at the farm, as well as in your gardens.

UMass Extension sends out a newsletter for vegetable farmers throughout the year called Vegetable Notes. In its most recent issue, Steve Reiners of Cornell University lists several problems farms may be facing:

“Heat impacts vine crops like squash, melons, pumpkins and cucumbers both directly and indirectly. High temperatures lead to more male flowers at the expense of females. And it’s the female flowers we need to get fruit. Plus, hot days keep bees from foraging and pollinating. So even with female flowers, you may notice them fall off as bees failed to do their job.

Tomatoes are not immune to the heat either. Although we think of them as heat loving plants, they prefer more seasonable summer temperatures. Hot days over 90F and warm nights over 80F results in pollen sterility. Similar to squash, without viable pollen, you may notice flowers and pea-sized fruit fall off the plants. The condition is temporary, and fruiting will return to normal when it cools down. But that might explain the lack of fruit you might see about six weeks from now. That’s just about when the fruit that should be setting now would be ready for harvest. Peppers too have a similar problem with fruit and flower excision.

Cucumbers become more bitter due to a high level of cucurbitacin, a compound that occurs naturally in the fruit but usually at low levels. Stress of any kind tends to increase its level. Tomatoes and peppers will develop more blossom-end rot as drought stress reduces calcium uptake. Sunscald is also a problem. Fruit exposed to temperatures greater than 95F can experience yellowing and browning while temperatures 5 to 10 degrees higher can cause necrosis and death of tissue.”

At Stearns, we may see a decrease in pepper production due to flower excision. We are also seeing a lot of sunscald in the peppers and blossom end rot in some of the tomatoes. In addition, some of the cucumbers and squash may taste bitter due to an increase of cucurbitacin.

That all said, the heat and sunshine are doing some good things as well! We are picking more eggplant, tomatoes, tomatillos, and hot peppers compared to this time last year. The cucumbers and squash have been producing an amazing amount of fruit, our basil plantings have been doing very well, and our field cilantro is growing back with incredible speed!