2. Melt 4 tablespoons butter in heavy large saucepan over medium heat. Add onion and cook until translucent, stirring often, about 10 minutes. Stir in parsnips and 3 teaspoons chopped rosemary. Cook until parsnips begin to brown, stirring occasionally, about 8 minutes. Add rice and stir 2 minutes. Add enough warm broth to cover; simmer until almost all broth is absorbed, stirring occasionally, about 6 minutes. Add more broth, 1 cup at a time, and cook until rice and parsnips are tender, allowing each broth addition to be absorbed before adding next and stirring frequently, about 20 minutes total. Remove from heat; stir in remaining 1 tablespoon butter, remaining 2 teaspoons rosemary, and cheese. Season risotto to taste with salt and pepper. 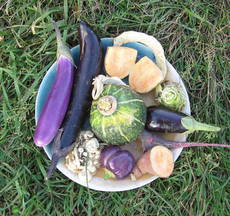