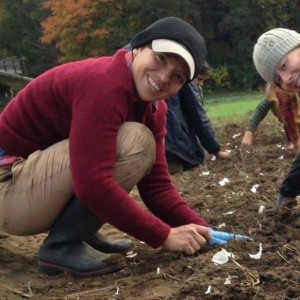 Melanie Hardy, a former manager of Land’s Sake Farm in Weston, will join Stearns Farm CSA as 2016 farm manager on Jan. 1.  She has been farming for 15 years, working at large and small farms in the northeast and in Arizona.

“There’s something really beautiful and simple about Stearns that I’m really excited about,” she said in a telephone conversation last week.

Melanie grew up in Stratford, Connecticut, on Long Island Sound.  “We lived in a little Cape house with a tiny yard, so we didn’t do a lot of gardening, but I did do a lot of fishing,” she said.  “I attribute some of my farming roots to that sort of self-sufficiency.  Once or twice a week, especially in the summer, we ate fish we had caught.”

She started growing plants when, at 18, she got a job with a landscaping company on the east end of Long Island. “I loved working outside, but it wasn’t as fulfilling as I wanted it to be.”  Meanwhile, to earn extra money, she worked at an organic farm stand run by a local family.  “I loved the small family farm feel,” she said.

Among the crops Melanie enjoys growing, alliums and root vegetables are favorites.  As she prepares for the Stearns summer season, she”s looking forward, also, to growing tomatoes in the cathedral and perfecting her techniques for producing loose greens.

She expects to spend her first season at Stearns becoming familiar with the systems that previous farmers have established.  “It takes a while to learn who you’re farming for, and what the land is like. I’m looking forward to getting to know the community and the land.”

When she isn’t farming, Melanie draws, paints, quilts and knits.  “A lot of farmers I know are artists,” she observed.  And she loves to cook. Her top three vegetable to eat: early season tomatoes, eggplant and cabbage (as sauerkraut).

Melanie studied agroecology, the study of the ecology of agricultural systems, at Prescott College in Arizona.  In addition to her work at Land’s Sake, she has farmed at Red Fire, an organic CSA farm in Granby, Mass (where she apprenticed) and recently at Hutchins Farm in Concord and Allandale Farm in Chestnut Hill.  She and her partner Drake and their two dogs (Max, a hound/Lab mix, and Gus, a terrier mix) live in Maynard. 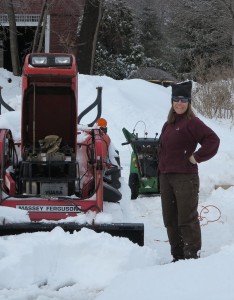 2015 Farm Manager Susan Peters found her calling as a farmer in Vermont in 2005.  Since then, she has worked on various farms growing vegetables, flowers, and berries. Susan loves animals and being close to the ground. One of her favorite things in the world is being in the silent Vermont woods, fixing maple lines during sugar season.  She also enjoys homesteading, cooking and fermenting, reading (her previous career was in librarianship), birding, speaking German, and listening to live music.   Susan is happy to be back in the Stearns Farm community. 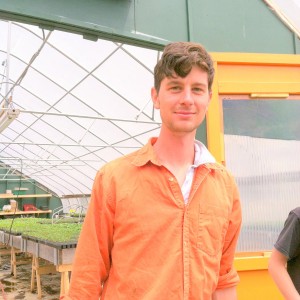 ly from Fairfield, CT, Kenneth Hacker is pumped to be back in Massachusetts after graduating from UMass Amherst with a degree in Sustainable Food & Farming and a Certificate in Permaculture Design. Since then, Kenneth has been a baker, gardener, and WWOOFer (ask me about it!), now finding his way back to his roots in organic CSA farming with the amazing team at Stearns.

When he is not scratching his head at the farm, Kenneth enjoys swapping recipes, rock climbing, exploring his new neighborhood (JP!), and playing board games. He has even been known to enjoy yard-work such as splitting wood and raking leaves. What Kenneth loves about Stearns is getting to work with all of the incredible people (and Lily) who call the farm their own. He is looking forward to seeing you all out there!